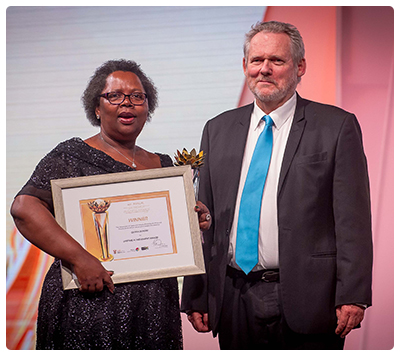 Minister of Trade and Industry Dr Rob Davies tonight bestowed the Lifetime Achiever Award on Ms Gloria Serobe, Executive Director of WIPHOLD and CEO of Wipcapital, at the 4th Annual South African Premier Awards hosted at the Sandton Convention Centre in Johannesburg. Ms Serobe has more than 30 years of experience in leading public and private domestic and multinational institutions.

The annual South African Premier Business Awards, held under the theme “Rewarding Business Excellence” are a key feature on the Department of Trade and Industry’s (the dti) calendar and celebrate national corporate excellence and success.

Minister Davies, in congratulating Ms Serobe said, “Ms Serobe has always reached for the glass ceiling, aiming to shatter it for herself and women after her. Her efforts over three decades aimed at transforming the national socio-economic fabric culminated in her establishing Women's Investment Portfolio Holdings Limited (WIPHOLD), an investment and operating company owned and managed entirely by black women. South Africans like Ms Serobe inspire the nation that when excellence is a way of life, success is assured.”

Minister Davies also announced the winners of each category saying they are “playing their part in building a competitive national commercial sector which contributes to the country’s growth and development objectives.”

The winners in each category are:

The Awards are jointly hosted by the Department of Trade and Industry, Brand South Africa and Proudly South African. Tsogo Sun, Old Mutual and the Johannesburg Stock Exchange are sponsors to the Awards.